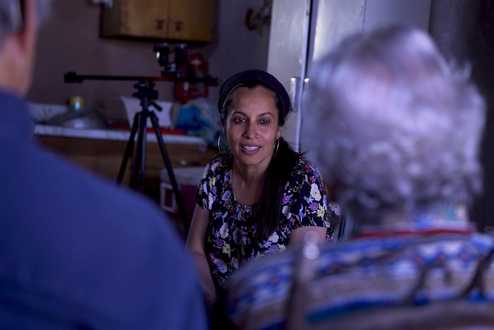 Shebana Coelho is a writer and director, originally from India, now living in New Mexico. Her work spans genres, from documentary to fiction, theatre to poetry. Her documentary work has been broadcast on American Public Television, National Public Radio, The Discovery Channel, and BBC Radio Four and has received a Telly award and a South Asian Journalists' Association (SAJA) Best Documentary Award. Her poems, stories and articles have appeared in domestic and international journals. She received a Fiction Fellowship from the New York Foundation for the Arts (NYFA), and a Fulbright grant to Mongolia. She wrote and directed When The Stars Trembled in Río Puerco, an oral history play, adapted from the work of Nasario García about life in four now ghost towns in the Rio Puerco valley (April 2014, Teatro Paraguas, September 2014, National Hispanic Cultural Center.) Her website is shebanacoelho.com

​
Nasario remembers the Río Puerco: Join the journey into the memories of the river that once ran.
See our trailer, read our story & please consider supporting us to help finish this film for broadcast